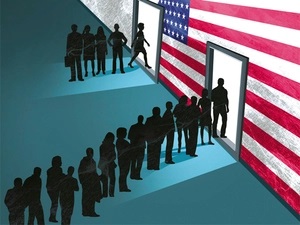 As known,a previous proclamation issued by President Trumpbarred green card applicants, diversity visa lottery winners, and other foreign guest workers from entering the U.S.  A recent order by a federal judge has partially blocked the proclamation. The proclamation ordered that the measure was needed because there is an economic recession during the COVID-19 process, aiming to protect American workers’ jobs during this crisis.

A U.S. federal judge (Amit P. Mehta) halted the proclamation and these efforts because these efforts and proclamation may prevent DV winners from getting their entry documents before the program’s deadline, September 30, 2020. The ruling ordered the U.S. State Department to undertake good-faith efforts as soon as process those applications and renewals by that deadline. The judge order will affect more than 900 DV winner-plaintiffs.

After the ruling was released, the State Department sources confirmed that they have started to review the order with the Department of Justice.

The presidential proclamation had aimed to extend a previous presidential order that barred entering the U.S. for green card applicants and DV winners. The proclamation extended the previous order to include some other visas such as H-1B, H-4, and L, most J visas for work- and study-abroad student and visiting scholar-programs.

The presidential order barred all visa categories entering the country through the end of the year. The administration claimed that the proclamation ordered because it was a necessary step to protect jobs for U.S. workers during the pandemic process.

The order was sued for annulment by a group of plaintiffs from foreign medical graduates with residencies at hospitals treating patients with COVID-19 to employers in the shipping industry. The plaintiffs of the lawsuit claimed that the rationality behind the proclamation was unfair. They also argued that Congress has rejected the premise that competition for jobs in the U.S. is a zero-sum game by maintaining and expanding the immigration system in the U.S., even during the pandemic process.

The court also ordered that the U.S. State Department’s policy of not reviewing and adjudicating nonexempt visas is incompatible with the law and exceeded the limit of statutory authority.